Home › Uncategorized › On The Nature of Reviewing

On The Nature of Reviewing 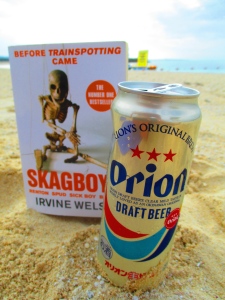 A happy New Year to you all. I hope, if you celebrate Christmas, you had a merry one. If not, I hope you still had a merry December. I’m currently on a beach in Okinawa getting the holiday that was denied me in October when I broke my leg the day before flying to Australia. Relaxing, catching up on some pleasure reading and doing the odd bit of sightseeing, lovely.

2016 started fantastically for me, with this review of Silma Hill by Dr Neil Syme of the University of Stirling. It’s a well-understood aspect of literary theory that what a writer intends in their book and what a reader might find in the text are two very different things. However, every once in a while, the reader’s experience gels perfectly with the writer’s intentions. Audience engagement for a writer is a strange thing. For a stand up comedian, a stage actor or a musician, response is instant: you get a laugh, an ovation, dancing in the aisles. Or rotten fruit and boos. At most public appearances for the writer, the audience hasn’t read the book yet. They are curious, hoping to be encouraged to buy a copy. When they do, they take it home, read it by themselves and, if you’re lucky, post something about it on Goodreads or Amazon or a blog. More usually not.

In the months since Silma Hill came out I haven’t been able to gauge if I achieved what I set out to. Some people have loved the book, others less so. The bad reviews have, in the main, been by people expecting a certain kind of reading experience, finding that Silma Hill isn’t that kind of book and therefore judging it a failure. For me, that’s been intensely frustrating. It’s like a rock band releasing a new album and being told that it’s not a very good symphony. Well, no, but it was never meant to be. With Silma Hill I very deliberately set out to place it in a tradition while having fun with some of the expectations of that tradition. Dr Syme picks up on this and it’s like, finally, getting that big laugh at the end of a long joke.

There’s a wider argument that reviewing has been so devalued by newspaper editors (column inches devoted to book reviews have shrunk dramatically in the last few years) that they have reverted to the kind of ‘I’d give this book seven out of ten and recommend it to my friends’ book reports we did in primary school. Some apparently professional literary reviews are written by people with little expertise or experience with literature, people who don’t understand the traditions, the pulls, trends and ebbs within literature.

I won’t go into a full rant here, it’ll just come across as sour grapes when in fact it’s coming from someone who has a deep respect for the tradition of literary reviewing and hates to see yet another area where expertise is being devalued and all opinions rated as equally valid. Some opinions are more equal than others. I love music but I know nothing about, say, classical music. The fact that I can buy a CD, sit down, listen to it and write 500 words on my reaction to it doesn’t in any way imply that those 500 words should be taken as a considered, intelligent engagement with the artist and their work. As a reaction, it’s valid, but holds absolutely no value. Unfortunately, that’s what tends to get passed off as reviewing these days. So when an expert in Scottish Gothic like Dr Syme pronounces Silma Hill a success, you can understand why I was jumping around my hotel room. It’s not that it’s a good review. It’s a good review by someone who really knows what he’s talking about.

Interestingly, I suspect time and thought play a factor here. The only review on First Time Solo that engaged with it on a similar level was by Alistair Braidwood on Indelible Ink. Both novels were published in June (2014 and 2015 respectively) and both reviews appeared the following January. For marketing and publicity reasons, reviews are sought and pushed in the days and weeks immediately following publication. I suspect now that this scheduling (I know as a reviewer that papers and journals aren’t interested in something that was published six months or more earlier, it must be now, now, now) provokes rushed responses, the book often handed to whomever happens to have a gap in their diary. I can understand that this is desirable from a marketing point of view – a flurry of reviews can push a book into the wider consciousness – but it does make for snap judgements and shallow engagement. For a good example of this, listen to or read any interview with Kazuo Ishiguro done immediately after The Buried Giant came out; his frustration at reviewers and interviewers who have skim read and reached a quick conclusion is palpable. There’s a discussion led by Claire Armitstead of the Guardian which is particularly amusing.

It’s the way of all things, recently. Social commentators talk of the ‘democratisation’ of opinion, particularly online, completely misrepresenting both democracy and the nature of opinion. A doctor’s opinion regarding your chances of survival carries much more thought, knowledge and experience than an untrained, inexperienced patient doing a quick Google. Mitchell and Webb explain it much better than I ever could:

Sorry, this was meant to be a positive post to start 2016. That’s the problem with holidays – these thoughts have been festering for months but I haven’t had the time to sit down and let them out. I’ll be back soon with some exciting news (just waiting for clearance), until then…